I would have liked to have gone to St Andrews for the whole period of StAnza, but this wasn’t possible because of my lecturing work, however, we set off very early on Friday morning with the aim of arriving in time for Martin Figura’s show Dr Zeeman’s Catastrophe Machine. We stumbled into the welcoming atmosphere of The Byre in time to get tickets, check into our accommodation and dash back for the show. Even my ‘not-into-poetry husband enjoyed it. Figura puts his heart and soul into everything he does, and his wicked sense of humour leavens any darker material. The set is very appealing to anyone who lived through the latter part of the 20th century, and the script is a rich mixture of poems and commentary. The real star of the show is Martin’s daughter Amy, whose life is a source of wonder to him, and to the audience, because she lives things so fully, getting involved with her favourite cartoon characters, and with her wonderful way of language, like calling the cinema screen a ‘big video’.

I had to miss some great events to eat and unpack at the rented flat, but I did manage t get a ticket for Poetry Centre Stage. Pippa Little gave a delightfully tender reading, taking us through several of her collections in a beautifully sequenced order. Her voice is lovely to listen to. Mark Ford was a contrast, in that his muscular style presented his surreal narratives in an entertaining way, but his body of work was less my cup of tea than Pippa’s, whose work I already knew.

The ‘Risk a Verse’ slot afterwards was brilliantly hosted by Andy Jackson, and a good range of poets performed their work against the background of people having fun, though the mike helped us cope with that. I read my #MeToo poem, which I felt was important, as copies of the book were on sale at the festival, and I had heard that the launch the night before had been so popular not everyone had got in!

My first thing on Saturday was an early visit to the legendary Poetry Market, where  one is sure to bump into friends and part with cash. The Red Squirrel stall was the first one in, and £20 left my purse with rapidity, as I wanted Elizabeth Rimmer’s Haggards  and Brian Johnstone’s Juke Box Jeopardy, continued the theme of music from the latter part f the 20th century, after Dr Zeeman’s.   I’d enjoyed Anne Pia’s poem the night before so I bought her book, and met Eileen Pun, finding we had a passion for book-making in common.

There were many great events I would have liked to have gone to on Saturday, but I’d left my ticket purchasing till we arrived, so that  limited my options. There were tickets left for the Don Paterson / Marie-Elsa Bragg conversation so I went into that and made a few notes, as it was an interesting topic, on the borders between poetry and prose.

My next event was the book launch of the W.S Graham anthology, which I had meant to submit to but forgot, so I did the next best thing and bought a copy. This was a lovely relaxed event. It was good to see Douglas Dunn again, and Rachel Boast read a Graham poem which was new to me, so beautifully, and a few other contributors got up and read theirs too. Vahni Capildeo read hers, and we had a brief chat afterwards. I have not yet had time to read the book, but it will be a joy to come I am sure.

Poetry Centre stage on Saturday night was something I had been looking forward to. William Letford presented us with poems from an apocalyptic imagined narrative of diary and poems, which was highly original, but the real highlight for me was Liz Lochhead in the second half. She was every bit as passionate and funny and entertaining as she was all those years ago when I first met her. Liz  encouraged me when I was a young poet, telling me I was a ‘born poet’ and I ‘had’ to publish. This was like someone who knew what she was talking about giving me ‘permission’, and it made all the difference to me. To my utter amazement and joy, she remembered me right away, and we had a lovely chat after she’d done all her book signing. I promised her a copy of my latest book, and made good on that the next day.

I decided not to attend the slam, because although the quality is high and I wanted to support friends who were in it, I find it very hard to cope with the audience noise, which is why I normally avoid slams. So it was an early night for me on Saturday.

I have been to the masterclass every time I have been to StAnza, because it’s fascinating. Gillian Allnutt chaired it calmly with many good insights, but perhaps there could have been a little more on where the poems were less successful. A few of us got into a little huddle afterwards to continue the discussion, which was fascinating, as we all made similar points about what we would have liked to have said had there been time.

There was time for a quick lunch at Zest cafe before going to hear Polly Atkin and Gerry Loose. I’d been looking forward to Polly’s reading (she was writer in residence at Gladstone’s Library this year, as myself and Katrina Naomi were in the past), and I’d bought Polly’s collection from her in person at StAnza 2017. As well as some great stuff from her books, she read a new poem imagining a bear in the library at Gladstone’s, inspired by the snow just after we left after spending the weekend there while she was nearing the end of her residency. Polly has a wonderful rich voice to listen to, which makes hearing her an aural pleasure, and her poems are just as rich, and sometimes strange and funny, too.

StAnza was starting to approach its last few events and I felt sad to think it was passing by so fast. I’d agreed to go and hear Gillian Allnutt with Liz Lochhead, so we sat together for the reading and then parted. I hope to keep in touch with her and I hope she thinks my poetry has developed over the years from those shy little poems she enthused about in my first book back in 1988.

After cooking a meal at the flat to avoid the Mother’s Day revellers, we both set off to the Festival Finale, which had excellent music and put us all in the party mood, though many friends had had to go by then, there were still plenty to chat to. StAnza is such a friendly festival, no-one stands on ceremony and I had some great chats with lots of poetry friends such as Linda Goulden, Sally Evans, Colin Will, Helen Ivory and Martin Figura, Sheilas Wakefield and Templeton, though only fleetingly in both cases, Brian Johnstone and Jean, Michael Augustin and Sujata Bhatt,  and many others already mentioned. I also made new friends or met Facebook friends in the flesh for the first time.

StAnza is a truly international festival with a very Scottish home. Having the Byre as a focus brings people together and the very air seems filled with the passion for poetry that brings us there. It’s massively inclusive and welcoming. This was my fourth time and I think I enjoyed it the most, because now I feel relaxed and at home, no longer shy.

Thank you so much to Eleanor Livingstone and the rest of the team, the polite and friendly volunteers and everyone involved. Hope you see you all again next year! 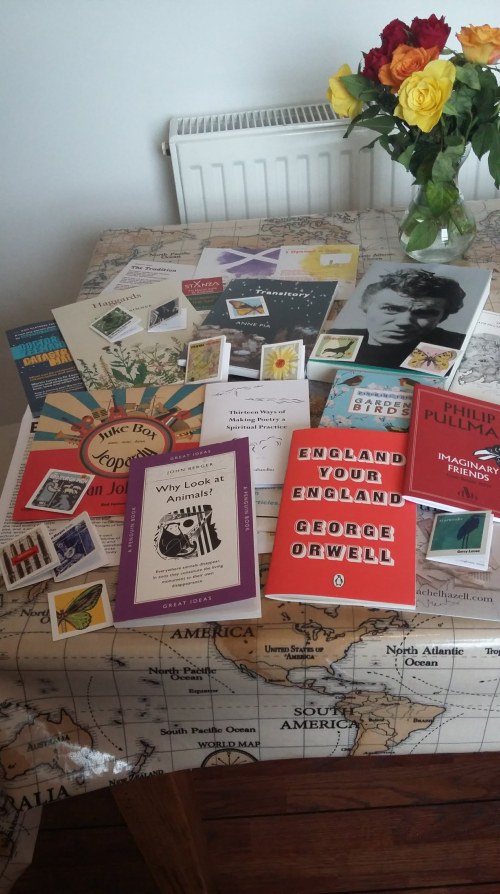