Most people have some small possessions of little monetary value, but great joy is attached to them, either because they please the senses or because they are associated with a happy memory or a loved person. Using and touching these things enables the owner to enjoy a sense of living in the moment, which is a key aspect of hygge.

I, who’ve inherited nothing, exceptthis nose more arched than a harp,these hips made to cradle a life,find in these old things enoughto still my quivering beak, which pricks in every direction of a map;enough to soothe the soup of my belly,which craves to feed to lips of a babe.Be still. These delicate, finely-wroughttreasures live in a cupboard that’s cradle-sized. My eyes sip at them daily,when making tea, or slipping the coatsfrom potatoes. Two cruets, as white asatoms; twin egg cups, as blue as forever.
The bowls I bought back in Kyoto,black and red, lacquered like beads.

A glass patterned with the queen of hearts, fashioned by hand in the50s. An iron teapot, for ceremoniesby kimono-clad women, or samurai.Is there a difference? I twirl my knifeand hum, keep my pattern of dailyritual before these sitting things,their bodies as sturdy as Buddhas. Cleared from the homes of the dead,they are small joys which, in mysmall world, loom large. The dustwhich rests on them, settles me. Relics and remnants, shy souvenirs;
yet their presence calms as I cut carrots,slice bread, my bird nose inert for a
minute, my stomach quiet for a time.

Propeller bias binding, a packet each of white, royal blue and pink,

3 yards, unopened, cellophaned and colour-fast; a strip of Velcro;

Cards of silver poppers; two more of hooks and eyes; a buckle blank;

Petersham and Rufflette tape; a pair of scissors, plated gold,

Shaped like a peering stork; a crochet hook; some lace;

A dozen silver thimbles, each cupped inside the next

And wrapped in tissue; a twist of jet black bugle beads;

Large safety pins in silver and smaller ones in gold;

A sheet of iron-on transfers – a lamb, a dog, a horse;

A bodkin; bobbins; a quick unpick; a shuttered zip;

Babies’ buttons shaped as trains and stars and berries;

And so much thread – Coats and Sylko, Drima, Anchor, Gutermann –

In party colours, scarlet, turquoise, rose. And so much thread.

Hygge is about sharing, whether it’s soup, light in a power cut, peace, or time with friends, what ever we have to offer to help cope with difficult times, losses and sorrows.

The cold slow of mornings,
fetching coal, with cloud breath,
to a rupture of rooks,
their throaty rasp
and the winter-bare tree
standing against pallor of sky.
Then henhouse flurry
with its warm-shit smell.
All those lengthening evenings,
coaxing flames to mottle her shins,
as she sank into her armchair-nest,
by the scuttle.  She missed her big iron pot,
brimming with soup-spells.
Never the same twice,
‘This might taste good with that’.
Curry for parsnips, tarragon for celeriac,
chilli to liven pumpkin.
Always better next day,
flavours melded into steamy comfort.
All these she missed, but mostly
the stillness that drank her to its core.

The Night The Lights Went Out

She took a small canvas bag
from the cupboard under the sink,
filled it with an assortment of nightlights –
vanilla, blueberry, winter spice –
added a couple of dumpy glass holders,
a box of matches, a bar of chocolate.
The house on the corner was in darkness,
the knock on the door answered
with a tentative ‘Who’s there?’
Years later, they laughed about the tea,
the water boiled in a pan on the gas ring;
the shortbread eaten straight from a tin
intended as a Christmas gift;
the chocolate eaten square by square;
the shimmering candle flames
shining light into the darkest corners.

But our ashes only 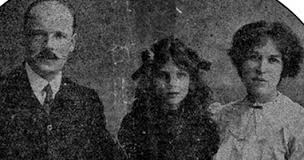 Titanic seems to go on inspiring poetry, and my blog feature seems to have brought more poems out of the icy sea of its memory. Angi Holden sent me these two poems as a result of exploring some stories not usually told.

At first, nothing but this strange quivering; then silence

and a sepulchral stillness – no panic, for surely we cannot sink.

Refreshments served in cabins, a cup of tea, a chicken sandwich,

Later, we hastily slip our coats over lace-edged negligees,

choose slippers for speed over shoes and buttoned boots,

strap ghost-white life-preservers across our breasts.

We clamber into boats, are swung into the air above the sea,

wanting to stay close to the liner’s smoke-stacked bulk.

Wives call out for husbands, mothers for their sons;

in answer only dimming deck lights and the cries of drowning.

the shouts of help, the haul of ropes, the reaching hands.

for Harvey & Charlotte Collyer and their daughter Marjorie

In my dreams I see you, one arm folded beneath your head,

the other thrown aside as if you could perhaps reach out to me.

It is a calm repose, the relaxed sleep to end a busy day.

The seabed holds you, supports you like our marriage cot;

silt, creased like linen sheets, ruffles round your limbs.

I would drape a blanket over you, protect your back from draughts;

then I see you wear your Sunday suit and I remember. Wake.

Relive those bitter hours of fear and cold, the creep of anguish,

the glare of public bulletins, the newsman’s callous flash.

There were kindnesses: clothes for us both and toys for Madge,

relief from Mansion House. But all besides my wedding ring was lost;

pressed beneath your now-stilled heart, your breathless chest.

The first of these pieces, about the governess, captures the mood on the ship after the collision. The second is concerned with the after effects on one family. So many wives were widowed, so many children made fatherless, by the cruel rule of only allowing women and children on the boats. At the time, this rule did not seem cruel. But had their been sufficient lifeboats, it would not have been necessary.

Titanic taught us we cannot beat nature. I believe it continues to capture the imagination because it was the end of an age of innocence. The two world wars made sea disasters almost commonplace. 1912 was a time of optimism and hope of a brilliant future, which was shattered all too soon.

Thank you to Angi for submitting these fine poems.