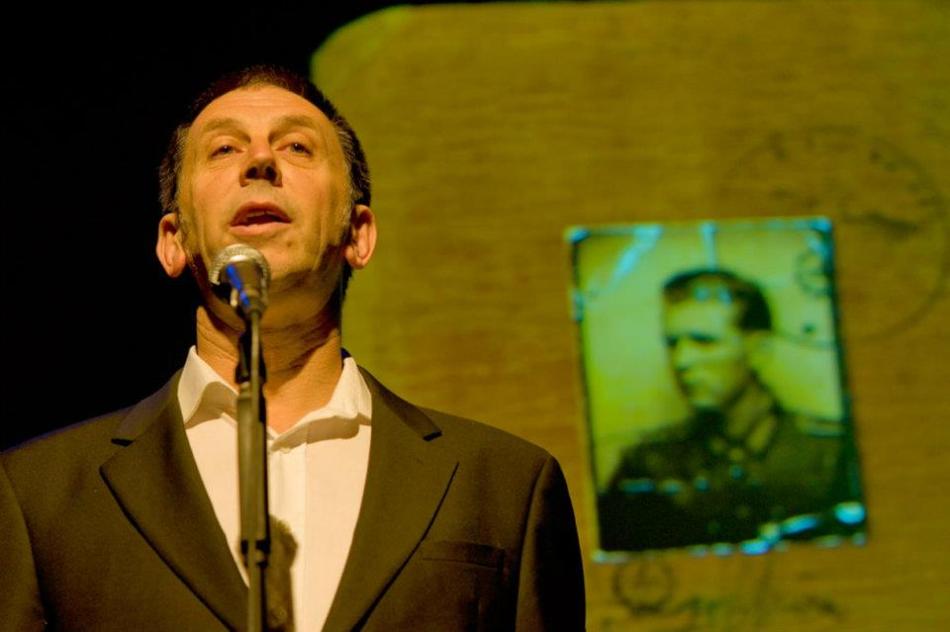 Last night I had the privilege of attending Martin Figura’s show Whistle. A man in a black suit, a single microphone, poems and a slideshow: combined, these simple ingredients can be incredibly powerful. Figura is an accomplished performer and a fine poet, and his subject matter riveting.

I couldn’t help but think of Hamlet, whose father’s death at the hands of his uncle brought a cry for revenge from the ghost. Figura’s mother, June, was killed by his father, Frank, who was tormented by paranoia, struggling to distinguish the truth from his own imaginings. What stands in sharp relief, however, is the decency and love shown in Figura’s poems. Although his father never apologised for his actions when he re-emerged from his madness, Figura’s poems seek to understand the suffering that led to that terrible act, which robbed three small children of their mother. June’s character is celebrated through her touching love letters, read by Figura’s wife Helen Ivory, and by her evident desire to be a good wife and mother, showing off her babies in a Silver Cross pram.

As in Shakespeare’s plays, the poetry was distinguished from the prose links by potent rhythms and language which was varied in tone from the starkly direct to richly patterned, with occasional touches of surrealism. Figura was first looked after by his mother’s sister and her husband, then sent to boarding school, then to a children’s home, before being rescued by former kind neighbours. The narrative arc is compelling and the confused little boy had to adjust very quickly to his changing life. The forms of the poems mirror these changes perfectly. ‘The Vineyard Boys’ has a strong chorus and gives the listener pen portraits of the other children at the home, each one tugging at our emotions in different ways. This poem follows several tight-lipped and spare poems. ‘Piggots’ is a wonderful ramshackle list poem which is so rich it’s reminiscent of Dylan Thomas, and it is closely followed by ‘Little Angel’ which makes superb use of the villanelle form to express the boy’s earnestness at being ‘a good boy here’, as though it was his failure to comply which led to the tragedy. There is no trace of self-pity or sentimentality; instead a searing honesty allows the listener to participate emotionally.

Figura’s good humour comes through and his relationship with the audience is perfectly judged. Like Hamlet, he can make us smile. The last few poems deal with the legacy of Frank’s Polishness, Figura’s love for Polish sausages, and his revisiting, with his wife, of the places that shaped him. In ‘Dad’s Alma Mater’, they visit Broadmoor, can only gaze at the building. ‘I remember being small’ is a poignant line, so simple but beautiful in its context. The last two poems bring June back to life, as she should have been, dancing with her son, at seventy – a redemptive ending to the narrative.

The moving images, slides and family photographs all worked with the poems, rather than distracting from them. For anyone brought up at a similar time, the photos are evocative and bring back many memories, which help the listener identify with the context and appreciate the significance of many of the objects, such as the Dansette Frank buys after his release, old cameras and the recurring motif of a boy on a bike. However, the appeal to people of any age is strong, especially to anyone interested in family, relationships and coping with loss.

Whistle is an important book: it charts a working class Northern childhood, in which the fractures of the Second World War impact on its cast of characters. Frank, like many other young people, was a member of Hitler Youth, which may have traumatised his mind at a formative stage. He certainly kept this secret. The tragedy at the heart of Figura’s story is extraordinary, but also reflects the experience of other families fractured by difficult circumstances. The show brings the poetry to a wider readership, by making it an aural and visual experience which has enhanced the book for me.

Figura has performed this show at many festivals and it is impressive that he does it without script or book, without any barrier between himself and his audience. If you have not yet seen this show, I urge you to do so while it is still touring. Someone remarked to me last night that it was the best poetry event she had ever seen. I agree.

Comments Off on Whistle, at Chester Litfest 2012