The Notion of ‘After’ on poems: An attempt to define

There has been a lot of discussion recently on how poems which rely heavily on others should be attributed in work that follows it. There are people who say they work from a starting point of someone else’s poem and change words until they make it their own. I do not see that as creating, but learning how to write, and not to write something that could be submitted for publication. Poet means ‘maker’, not ‘alterer’.
Those who aspire to write poetry must read it and aim to learn from poets who have spent time learning their craft. Expertise cannot be gained overnight: it comes from years of practice and reading, experimentation and critique. Those who have immersed themselves in poetry absorb much. They don’t sit and write with other people’s poems to paste in or alter, unless they are doing cut ups and collages – and in that case they do make things anew, and they credit their sources.
When I write ‘After’ under the title of a poem of mine, I am acknowledging a starting point that has come out of poems I internalised long ago. Philip Larkin’s ‘The Whitsun Weddings’ is about a train journey across England in which he observes many newly married couples getting on to the train at various stations. My own poem, ‘Spring Lines’, which I share below, nods towards this poem, as I am expecting the reader to make a link between the Larkin piece, one of the most well known poems of the last century, because I too am meditating on something observed from a train I am travelling on. I do not borrow a single image or phrase from Larkin; my train journey, like his, was real. So embedded is his poem in our collective consciousness, that I doubt I am alone in being reminded of ‘The Whitsun Weddings’ anytime I take a train across country in spring. I write ‘After’ both to acknowledge that poem as a reference and to make the reader think of it as a kind of response. I do not take Larkin’s verse and change ‘bride’ to ‘washing’ or any such reductive method of composition. My structure, verse form and rhythm are my own, my ideas are my own, my imagery is mine. I did not have Larkin’s piece in front of me at any point; I had it in my mind as an echo, a fellow-feeling.

This poem was recently published in Hearth (Mother’s Milk Books), a poetry duet in which Sarah James and I respond to each other and interleave our poems.
I share my example because I can do so without infringing copyright. There are many thousands of poems which use ‘after’ to acknowledge what has gone before. That is its proper usage, NOT as an apology for misusing someone else’s sweated-over words.
Judge for yourselves:
Spring Lines

An early morning train to London and Canary Wharf
from Crewe, the first warm day of the year. Regular
as local stations, lines of laundry start to appear.

Backyards and suburban gardens, balconies of flats:
strings of washing hang half the length of England.
Freed-up linens, tugged by spring’s fingers, on parade.

Even the pegs are little miracles, brought forth
from ingenious bags, to clutch underwear,
spread sheets and dangle white lace handkerchiefs.

Small acts of love, pinned up with such hope of drying,
kissing an April Saturday from North to South,
a fanfare of frills, bunting-dressed to welcome spring. 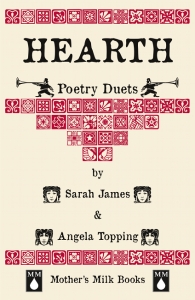