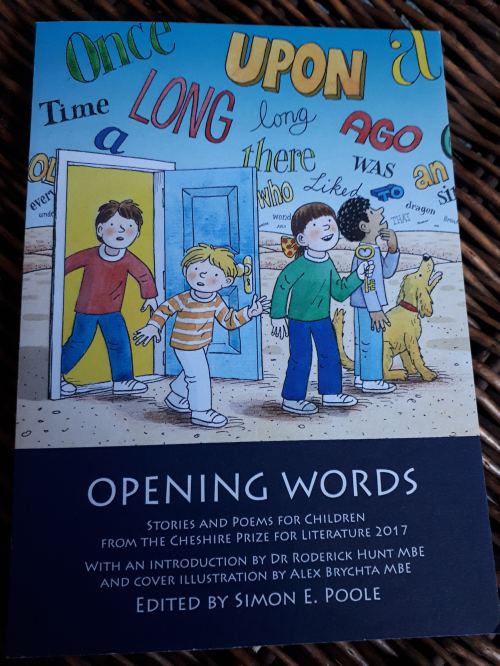 Another competition anthology I was lucky to get into was Opening Words, from the Cheshire Prize for Children’s Literature. (University of Chester Press 2018). Both prose and poetry can be entered, but very few poems seem to make it into the anthologies, though I have no way of knowing what proportion of entries fell into either genre. A few years back, I won a prize with my poem ‘Maggoty Johnson’. I was astonished on the night and thrilled to get a hug from Tony Robinson, who was presenting the prizes. My poem was the only one out of the top five entries: the other four were all stories. This time around, there were other poems in the anthology. This time, there were four poems included out of 15 texts, and all the winning pieces were prose. Apart from mine, all the other poems were funny rhyming poems. So I was proud of that.

I went to the launch, in the beautiful riverside building of Chester University, with wonderful views from the balcony. It was a lovely event, though sadly, my name didn’t come out of the hat to read my poem, because all the contributors’ names were put in, even though not all attended. I never have luck getting my name pulled from hats – it must be heavy and sinks to the bottom. Phil Redmond happened to be there, because he’s married to the mayor who was presenting the anthologies. He’s a real gentleman, showed a lot of interest in everyone’s writing. Another lovely thing was one of the other poetry contributors came with his friend as a plus one, someone I used to teach years ago in my FE classes. So it was marvellous to see her again and hear her news. I hadn’t seen her since 1992.

It’s funny how a theme can often emerge even when none was set. The editor Simon Poole commented that ‘having a touch of magic was perhaps the defining characteristic for all the entries selected for this year’s volume’.

The Cheshire Prize is a wonderful institution and I do try to enter it whenever I can. It is free to enter and anyone who has lived or worked in Cheshire is eligible.

This is my poem:

It was written after visiting Seaton Bay in Devon, on a visit to my friend, the fantastic poet Jan Dean.

Where to buy a copy: https://storefront.chester.ac.uk/index.php?main_page=product_info&cPath=12_13&products_id=768