As a poet and a lover of poetry, I really enjoy seeing the buzz around National Poetry Day every year. It is great that many schools want to get a poet in on this day, too. The day itself is a stone thrown into a pond: the ripples spread, and seem to reach everyone. This year’s theme is Change, which can be a positive but sometimes scary thing.

In 2011, one of my poems was quoted on a National Poetry Day poem postcard. I can’t recall what the theme was that year, something to do with sport, I think, because it was the year of the Olympics. It also suits the theme of Change, so I wanted to share it in full.

The poem came out of my knowledge of Greek Mythology. The goddess Nike (pronouned Nikey, to rhyme with Mikey) is the Greek goddess of Victory. It was first published in the Wenlock Poetry Festival Anthology of the same year, and performed brilliantly by Miriam Margoyles, who gets more laughs that I do, reading it. M y poem is the last one in this video, at 7 and a half minutes in, because it was done alphabetically: https://www.youtube.com/watch?v=AkE7HukwTbI&t=9s).

I imagined what might happen to a brilliant runner, who became so focused, they did not want to stop. As often happens in Greek myths, a transformation occurs. The runner rises into the heavens and eventually becomes immortal. It’s a kind of blown kiss towards Ovid’s Metamorphoses.

An Athlete’s Dream: A Modern Myth

The gun said Go and then there was running;
the rush of air zooming past;
the grip of the running shoes on the track.
I forgot the others, kept on running,
could not stop, round and round the track
until I rose high in air, while below
medals were suspended around necks,
rousing music struck up.

I ran circling higher and higher
above earth, leaping into blue space.
I did not tire. My shoes wore out,
the rags of my clothes fell away from me.
My orbit is far from earth.
My name is Nike.

Happy National Poetry Day, everyone! Lot of things going on all over the country. Find some poetry and join in, or pull down a favourite anthology and read some aloud. 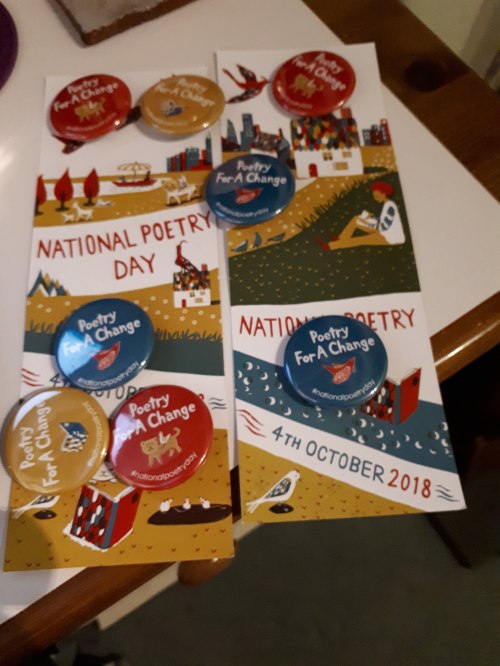 Comments Off on National Poetry Day 2018