On arrival in London, I went to the publisher’s book-lined flat in Bloomsbury to sign and number the 40 copies of my pamphlet which are sold in the sets. The actual event started at 6.30, and the room was already thronged when I arrived. Nicholas Murray, the publisher,  greeted us and plied us with wine, and soon a friend who had come to hear me joined us. Christopher Reid introduced himself to me and we had a few minutes chat before he was drawn away by some fans wanting his signature.

The four readers sat all together at a table at the front of the room. Roisin Tierney read from her pamphlet first. Hers is called Dream Endings and contains delicate poems that deal sympathetically with difficult subjects. It was good to hear them read in her soft sweet Irish accent which suited the poems. She was followed by Christopher Reid. His pamphlet is by way of a libretto for a piece of music which will be performed at the proms this summer. He was commissioned to write on the difficult topic of the first world war, and he told me he spent three months researching and reading all the war poets, feeling very humbled. I admire what he has done. He achieves a lot by taking a captain and a sargeant, representing different classes. They are hanging dead on ‘the old barbed wire’ to quote the old song. Airs and Ditties of No Man’s Land’ is the musing and conversation of these ghostly voices. There is dark humour at work in these little songs, and I look forward to hearing them with Colin Matthews’ music. I would really love to write some 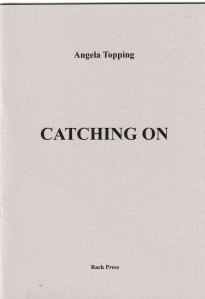 thing to be set to music, combining my two passions. It must be wonderful to hear your words sung.

I was up next, and quipped that I couldn’t be like Cordelia and say ‘nothing’, as the others had thanked Nicholas Murray. So I thanked him for giving me the push to complete these new poems about Matt, which were hiding, fearful, in my notebooks. I had to fill people in on Matt before reading seven of the elegies from Catching On. I really enjoyed the reading and had some really lovely comments and messages later. It always means a lot to me when people say I read well or that they liked my poems.

Nicholas had decided to go last with Get Real, because he didn’t want the bitter and angry tone to interrupt the more delicate poems. It was an inspired choice as it ended the launch on an upbeat note, as even if the sentiments were not shared by everyone present, the verse form made the points punchy and witty in the metaphysical sense. The long poem is an argument and tour de force against the coalition government’s lack of logic and unfairness.

The pamphlets are £4 each. Limited edition of 150.