Christmas is a wonderful time to a small child; it is a time full of magic and mystery. I remember one Christmas in particular, when I was around six years old. I still believed fervently in Father Christmas. I had vague memories of other Christmasses, where dreams had come true for me; somehow inexplicably the doll I wanted had materialised in the old pillowcase I used to hang up at the bottom of my bed. But at six, I understood that if I wrote a note and sent it up the chimney, then if I had been good, I might get my wish, so long as it was not too expensive, for Father Christmas had to get presents for all the children of the world, so I mustn’t be greedy.

So what was special about this one Christmas? Well, it was the Christmas I met him, face to face, and talked to him. It was the first time I had met someone famous, someone you could read about in a book. It was also the Christmas I first walked the boards of a stage, even if it was only a brief, non-speaking part as an angel, with a host of others.

Meeting Father Christmas was overwhelming, but I wasn’t even expecting it. I had been taken by my father to the forest, because it was my responsibility to choose the tree; mother said it was completely up to me! My head swelled with the importance of it all. We got out of the car to see a tall circle of trees propped up all around us, wearing giant hairnets, the smaller ones at the front and the taller ones lined up behind, just as we had done at school for a class photograph. I liked the tall ones, but I wanted a tree that would stand in our bay window, so children could count Christmas trees on their way home. I liked to do that myself.

I was pointing to the tree I wanted when I saw a rough wooden sign which said: This way to Father Christmas’! I tugged my dad’s sleeve. He smiled at the man serving us and asked him to save the tree for us, handing over a ten pound note as I pulled               him away down the muddy path. We turned a corner, and there he was!

He was sitting in a little log cabin, drinking a mug of tea. His cheeks were carmine, just as in all the pictures, and his beard was bushy white. He smiled at me and said ‘Hello’ in a chuckly voice. His eyes really did twinkle! He set down his mug as I dashed up to him. Last year I would have been shy, but being an angel had given me confidence.

He lifted me on to his knee. He smelt of soap and pine needles, just like Christmas always does. I was able to tell him my name and some of the things I would like to find in my stocking this year, and I thanked him for all the things I had had before. He said that I was a good little girl and my mummy and daddy must be very proud of me; I was a little angel. I wondered how he knew I had played an angel – but then I remembered, he knew everything.

Daddy led me back to the man selling the trees, and I turned and waved to Father Christmas. As we put the tree in the boot, the man called to dad that if we had only come a little later, he would have been able to take me to see Santa Claus. Dad smiled down at me. We had no need to see a person pretending to be Father Christmas; we had spoken to the real one and he was my friend. I shivered with the thrill of it all. 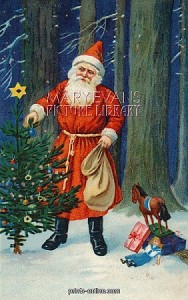