Close up of Ada's grave

Ada Lightfoot, my grandmother, died in 1933 at the young age of 51, ten years after she wrote the letters  to her daughter Frances. Her youngest child, Dorothy, was only ten years old. A friend emailed me this picture of her gravestone, where years later I saw my grandfather, her husband Peter Lightfoot, buried when I was 12.

My dad was only 22 when he lost his mum. I think that was also the year he got married to my mum. Small wonder the family did not come to the wedding: either Ada was very ill or had just died. The letters show how powerful her feelings were for her children and how strong the bond was.  One of them mentions how Peter, my dad, always felt knocked up when she was ill. I am glad he found a second mum in my maternal grandmother. I never met her either, Ann Coyne nee Lawler, but I have heard much about her and she seems to have also been a very loving woman. How sad that religion divided these families. 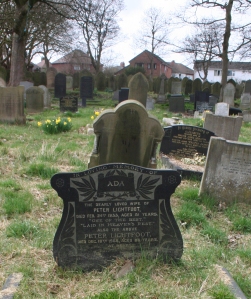 Close up: One of the Best

Filed under Everything else, The Inspirational Old Letters